Grains are not exactly exotic but in a garden they somewhat are. I’ve been interested in rope making for a long time and I’ve been interested in paper making for a longer time before that. I’m also looking into making oil from seeds to eat and to use as a finish for woodworking projects. When I saw r ranson’s threads on flax and nettle I just couldn’t resist so I blame her for this flax. So many paths to explore all from one plant. 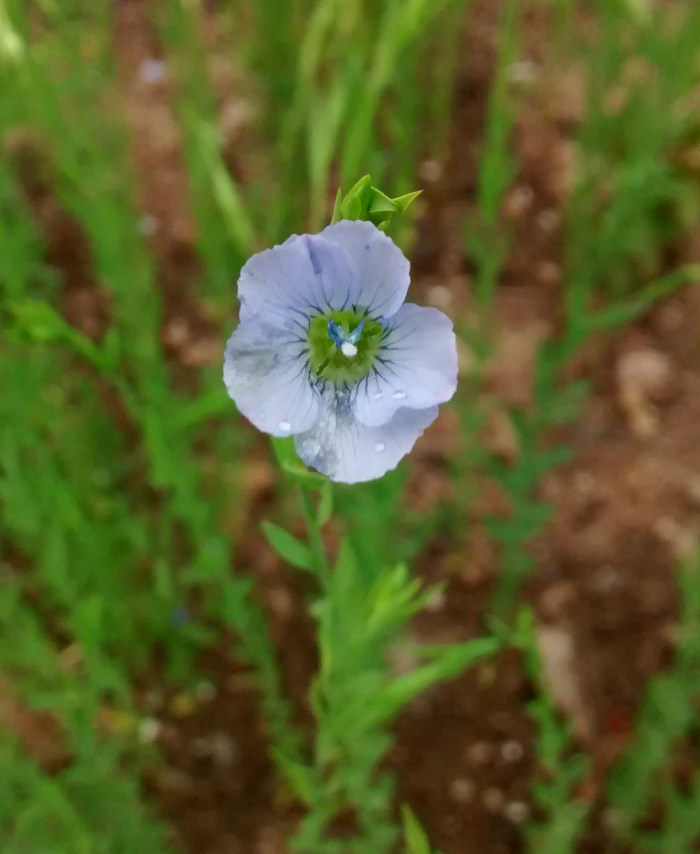 I ordered 100g of flax from Ricthers and sowed it on the hugel and in an empty patch near the corn. Most of the plants on the hugel dried up in the heat of summer but this one survived. You can see how the ones planted besides the corn patch is doing from the picture in the previous post. 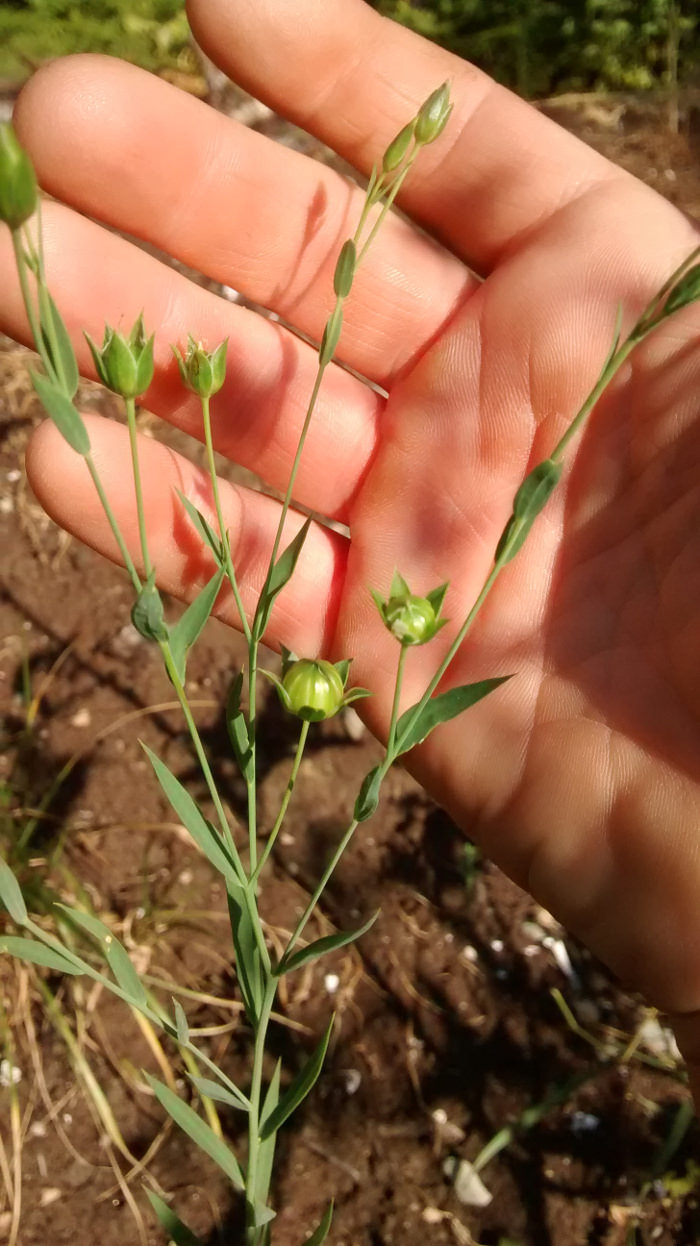 I was so busy pampering the tomatoes that everything else was left to fend for itself. Sorghum doesn’t seem to mind, it’s looking good. 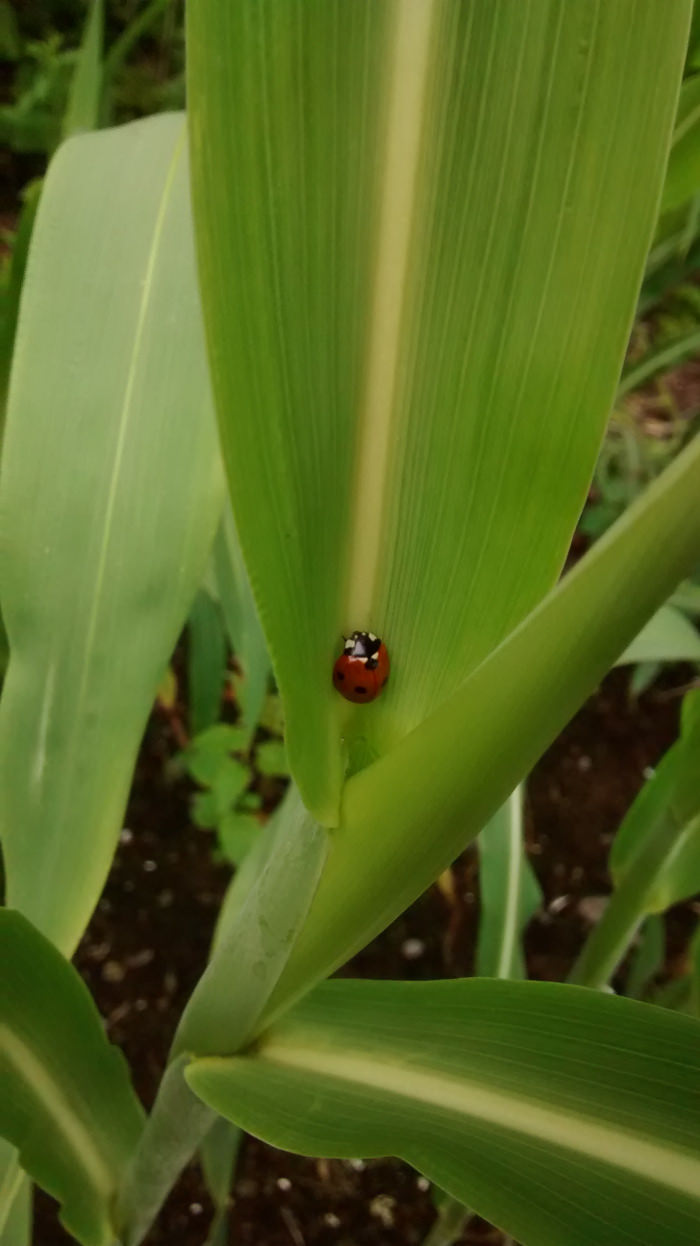 It looks a lot like corn doesn’t it? The seeds are from Hope Seeds and they say it takes 100 days until maturity. 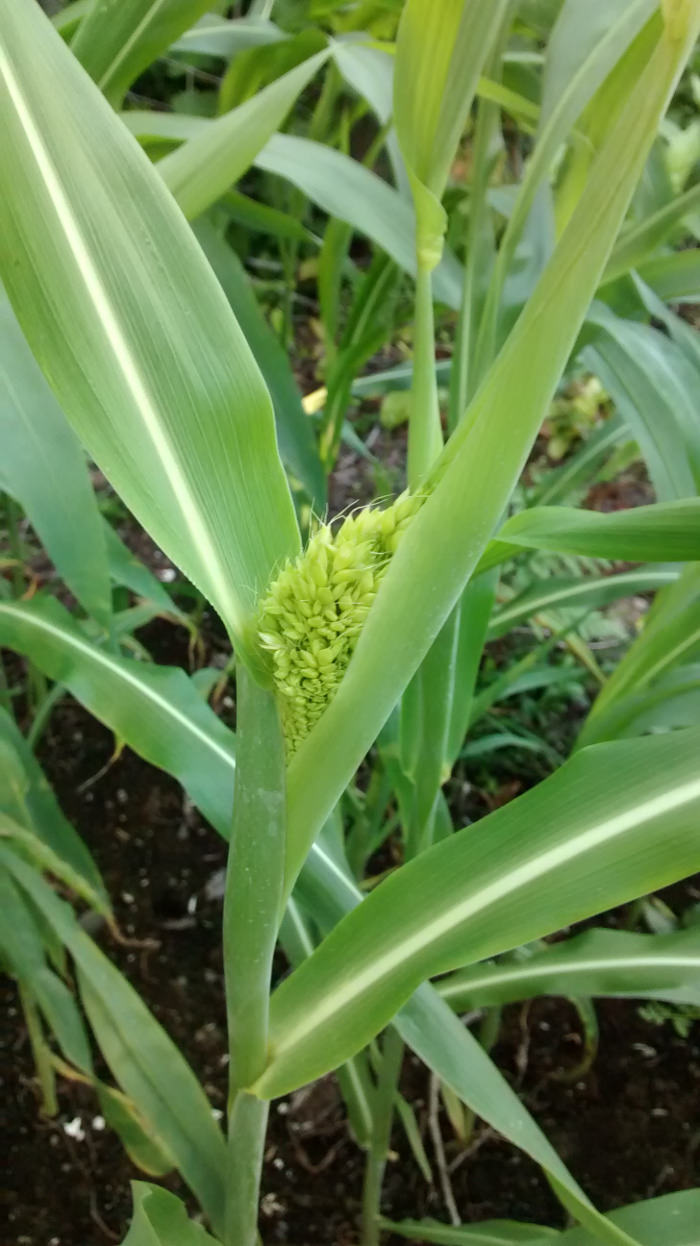 Another exciting project, buckwheat! It is popular with the Brayons, an Acadian community west of here. They make ployes, a kind of pancakes. It’s amazing the amount of insects feeding on these flowers. I think they are the most popular plants in the garden. 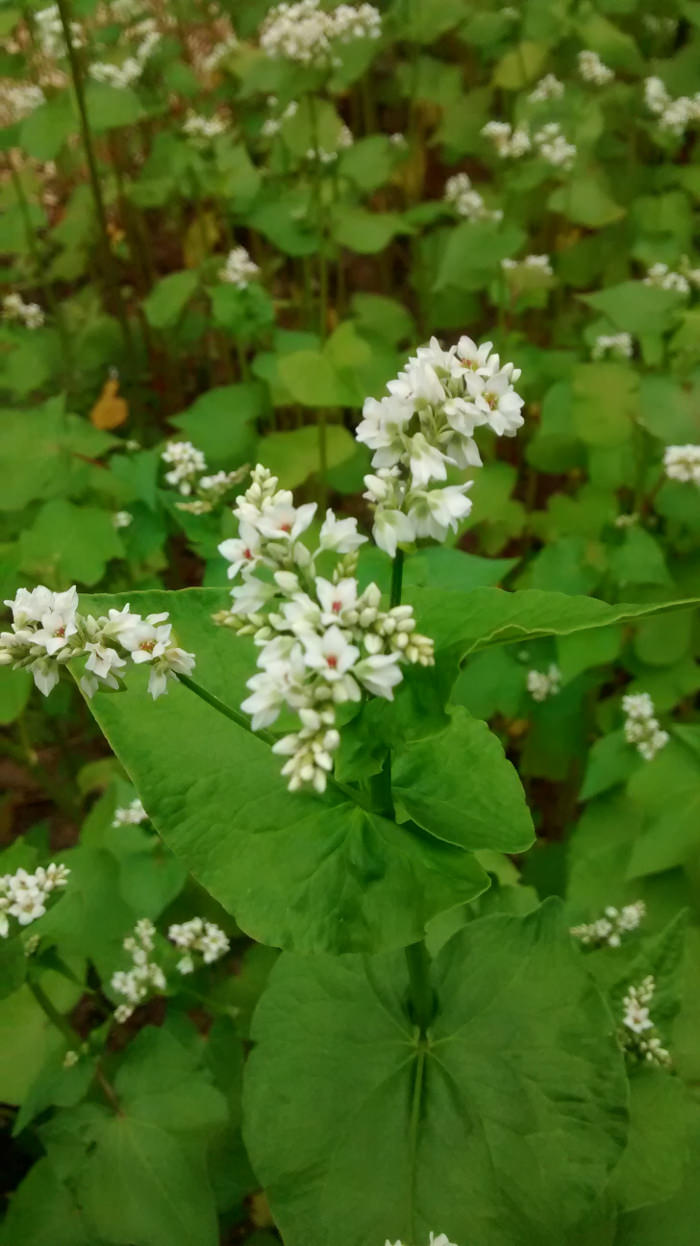 I read that buckwheat has an indeterminate growth habit, like tomatoes. So I’ll get seeds at various stage of ripeness on harvest. At the time I wondered how processing into flour would go because of this. It turns out buckwheat is very easy to make into flour. 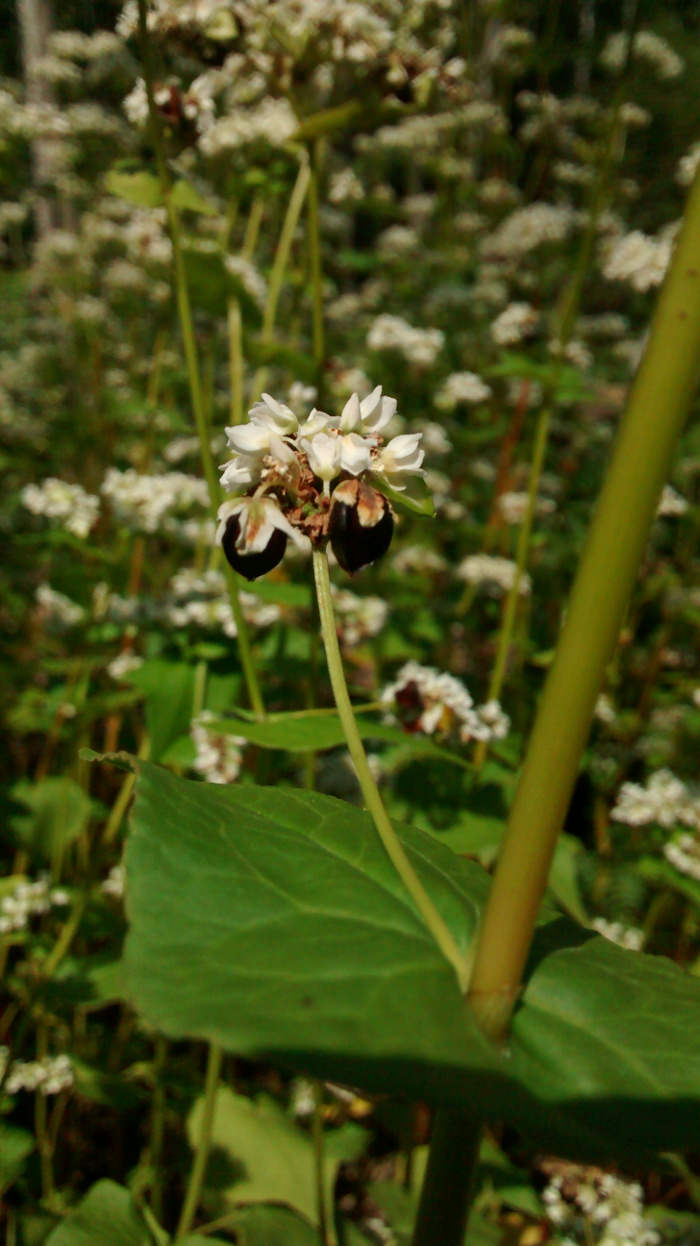 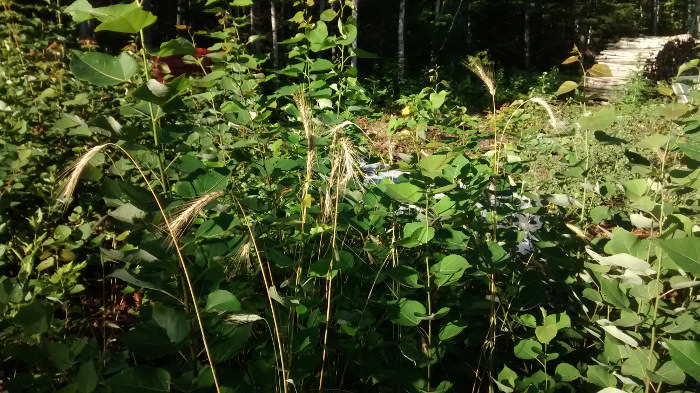 My cousin brought us a loaf of black bread from an artisanal bakery near Moncton. It was an instant hit, tasty! I remember eating a slice of rye sourdough from the Louisbourg fortress when I was a kid. I didn’t like the taste, I guess now I’m older. 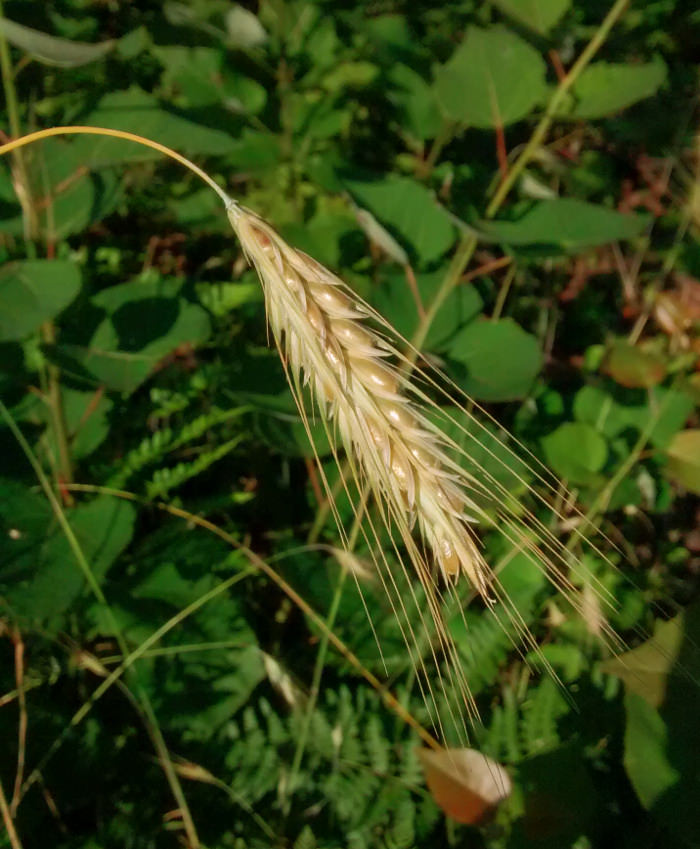 Did I harvest too soon? There is still some green. I couldn’t possibly harvest every single stalk, them being spread out into the wild part of the garden. I wonder if what was left behind will come back next year. 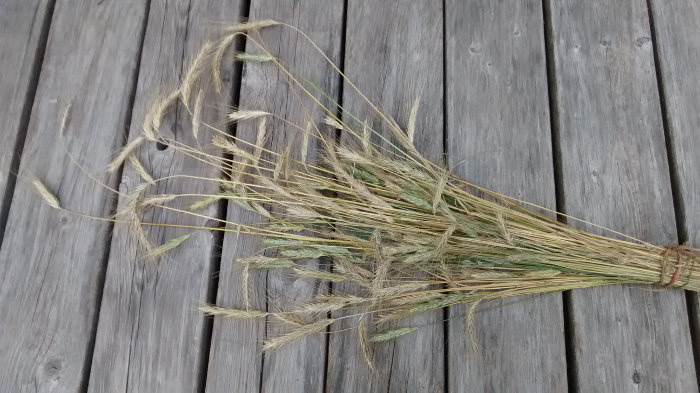 Another surprise. I’ve never seen this before but I can make a guess, ergot sclerotia! This knowledge comes from my younger days when I studied things that should be left alone. I’m concerned as there are many in the grain. Would removing them be enough to make the grain safe to eat? Anyway I have time to sort this out as there is no way I’m going to have enough grain to eat. The little I harvested will be planted next year. 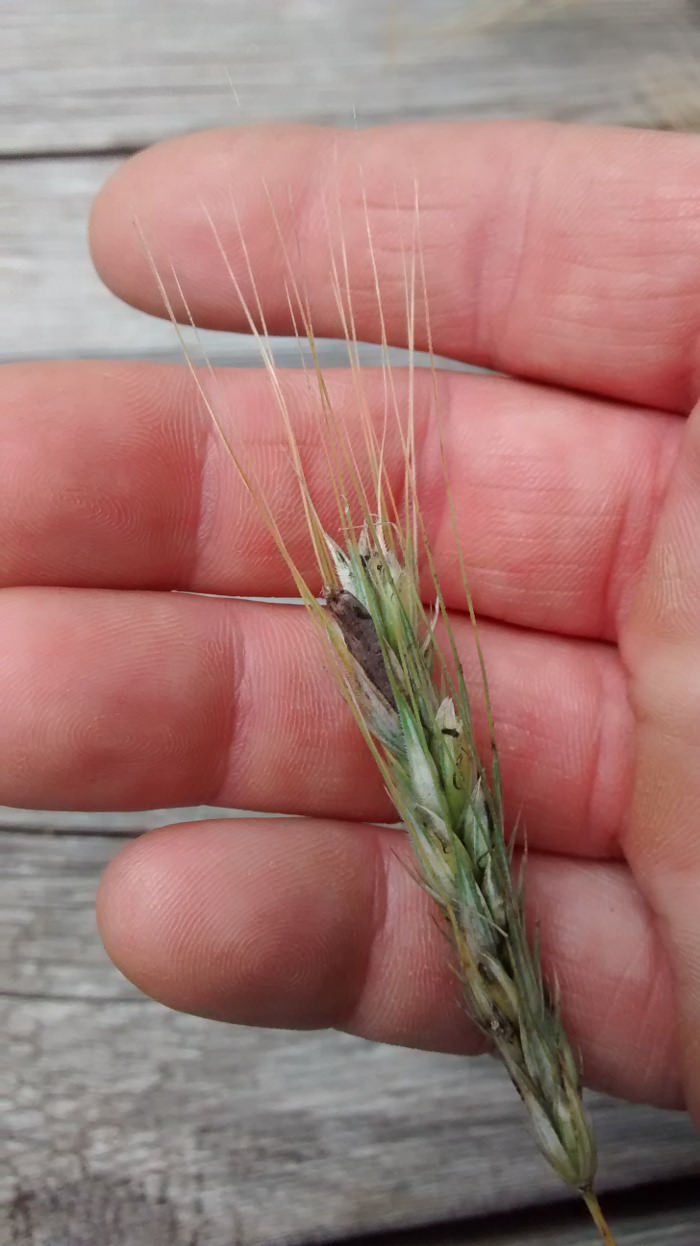 When I bought a pound of milling oats from William Dam I was not aware that the hull would be a problem. I didn’t know there were hulless varieties either. Nevertheless this is one of the more intense experiment in the garden. 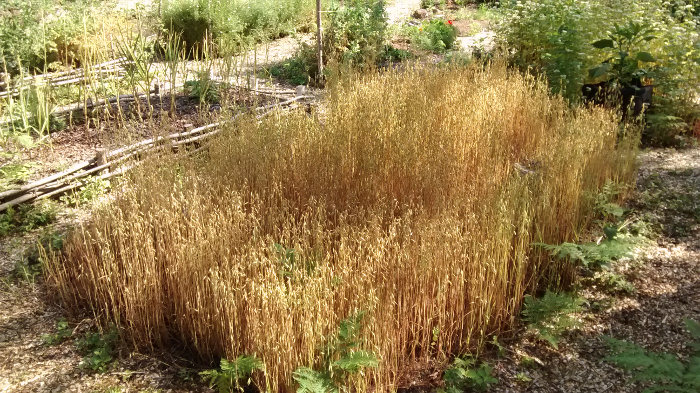 Like having chickens, growing oats makes me feel strange, not quite an epiphany but definitely something special. How many humans before me went through the same motions? Note the old sickle I found in the basement of my father’s house. 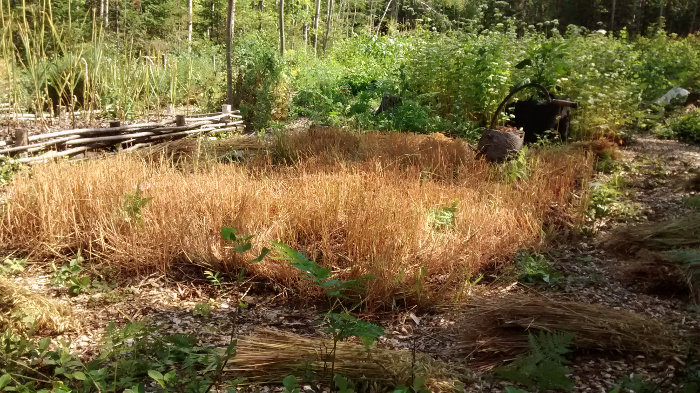 Cutting the oat was a bit difficult at first but I got the hang of it. I wished I had planted more. I don’t know what to do with all the grain. When I tried to mill it in the coffee grinder the hulls got pulverised along with the grain. 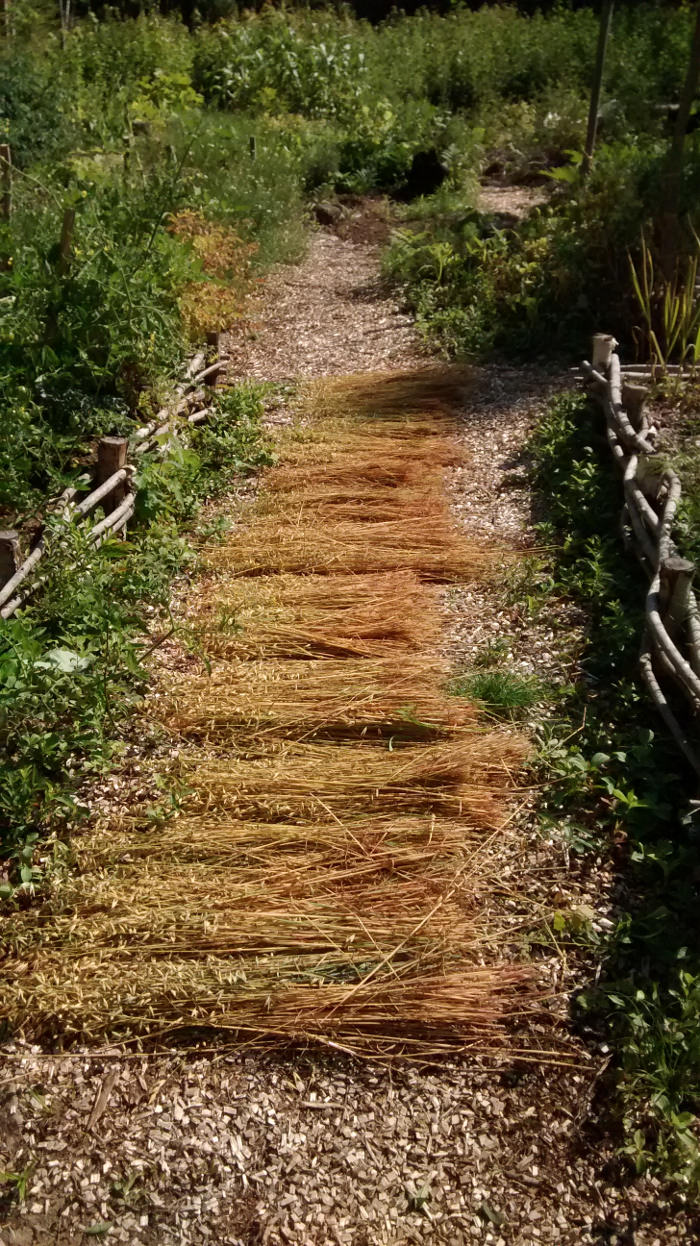 Garlic, oats, kale and rye drying in the wood shed. My stepdaughter told me this image looked like something out of Skyrim (some game). 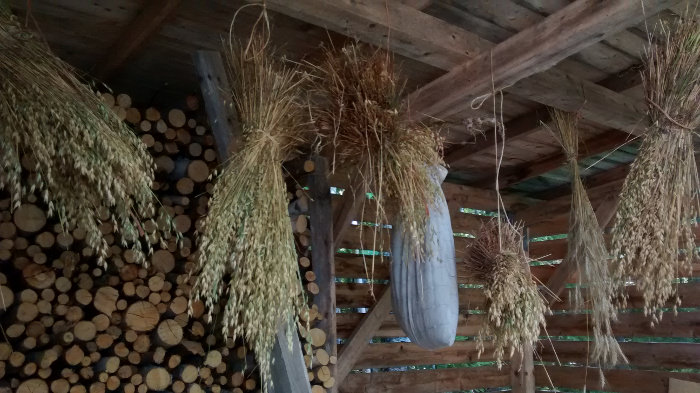