During winter I read a book called The Market Gardener, written by Jean Martin Fortier. I learned what a broadfork is and designed one for myself. It’s more sturdy than those you usually find online as I don’t have nice deep soil yet. What I have is dirt, rocks and tree roots so I wanted a custom tool. 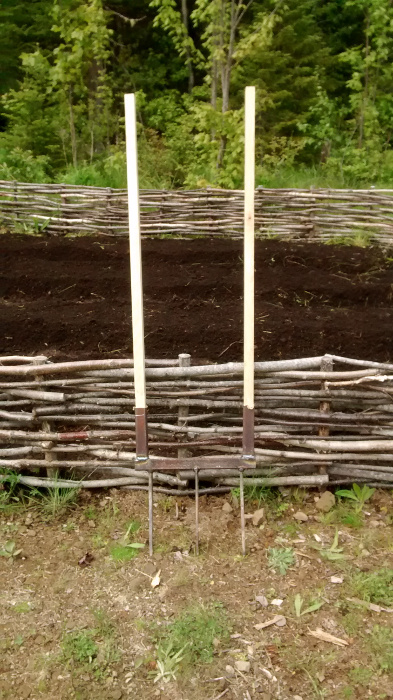 I also bought a big roll of Novagryl 19gr row cover. Fortier writes that it is effective against some pests but not so much against slugs. Slugs are my main concern. I bought the fabric anyway because of another book, The Year Round Vegetable Gardener by Niki Jabbour. She uses fabric row covers to extend her growing season and that is something I’m interested in.

In early spring I found a source of compost close to my land. It is made with waste from the fishing industry (lobster, crab, shrimp) and peat. The guy who makes it works for one of the big peat business in the region so he has access to lots of material. I got close to two cubic yards for 45$ and this stuff made an amazing difference in the garden.

I tilled the soil and laid the compost on top without mixing it too much. I was curious about how the compost would do when things got dry in late summer. It makes a crust and cracks. It doesn’t become hard as the raw dirt of 2015. It stays moist for a long time underneath the crust. And when there is rain the cracks heal somewhat. 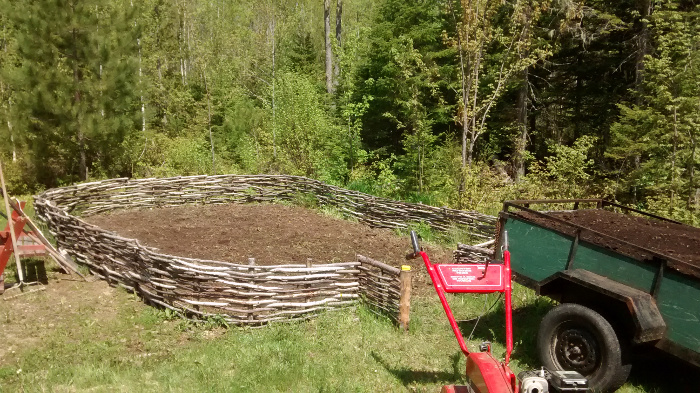 I chose two varieties of Kale (Scotch Dwarf Blue, Red Russian) and two varieties of Squash (Black Beauty, Yellow Pattypan). All my seeds came from Richters. I didn’t bother getting anything else, expecting to fail again. By the end of the season we had kale coming out of our ears!

The garden was divided into four mounds 24″ wide, maybe 18′ long. Three of the four rows were sown with Kale, the last one with Squash. The Kale I planted every 9″ in a staggered line. Of the two varieties Red Russian is by far the most vigorous. Unfortunately everybody prefers Scotch Blue.  The Squash I planted every 3′ in a straight line. Two Black Beauty and one Yellow Pattypan survived. Black Beauty is a true beauty. Yellow Pattypan does not like the cold. Its fruits should be harvested when they are real small or they will be full of seeds. 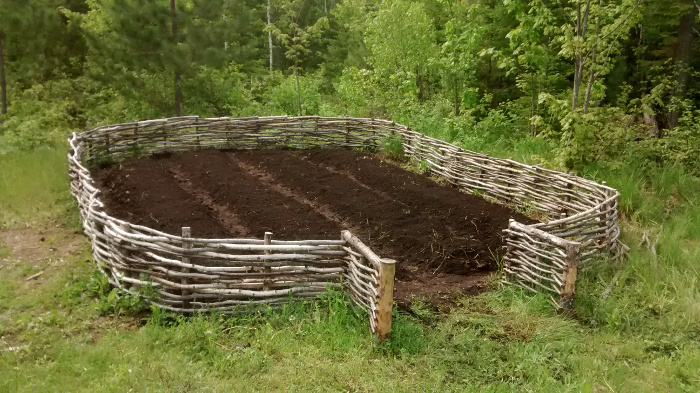 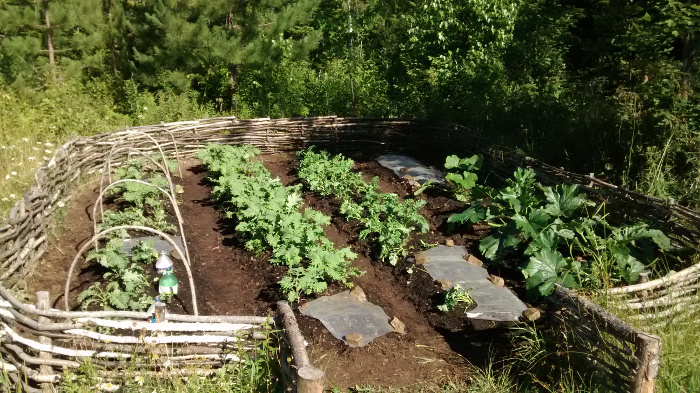 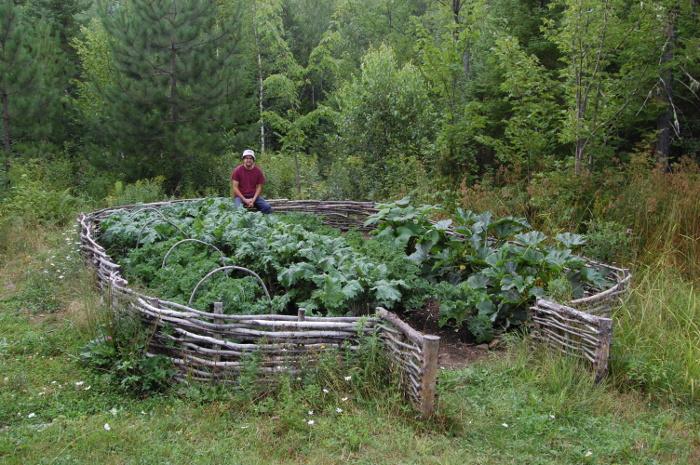 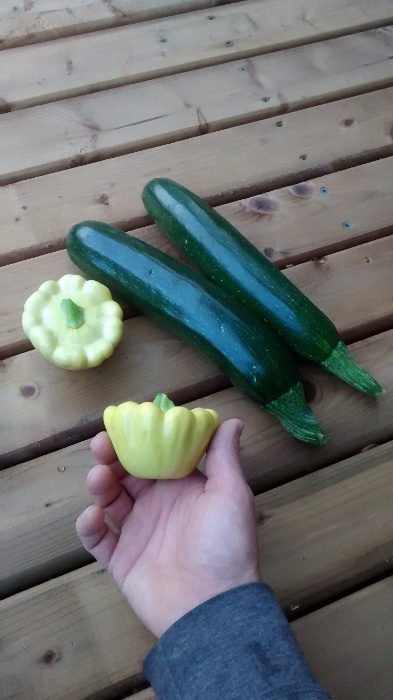 I was surprised at how much fruits a squash plant will give. And the amount of Kale that could have been harvested is embarrassing. My girlfriend accused me of being wasteful and in a way she is right. I gave a lot, I ate a lot and I froze as much as I could. At the time I didn’t know Kale could be dried. I guess I could have tried selling the rest but I suck at selling. I just like growing.

It’s not all waste though. Having so much gives you the freedom to experiment. I know how to cook Kale now. I’ve made pickles for the first time in my life. Also, after learning that Kale is a biannual I really wanted to see it in flower. So instead of tilling the garden in the fall like I was told to do I just left everything to rot. Squash disintegrated after the first few frosts. Kale was tough and I was still eating fresh leaves in November. But winter is harsh and out of all those plants only a couple made it through.  It only takes a couple.

I’ve eaten Kale this spring, I have seen its flowers and I might even harvest some seeds. There is no waste.

While writing this post I realized that without knowing it I probably paved the way for the major slug infestation I’ve witnessed in 2017. 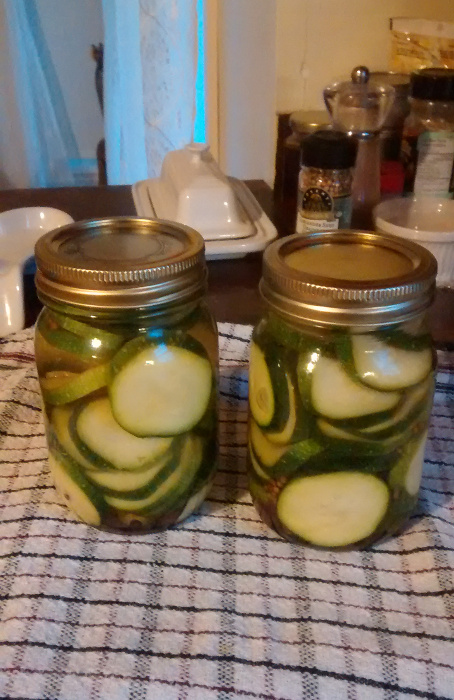 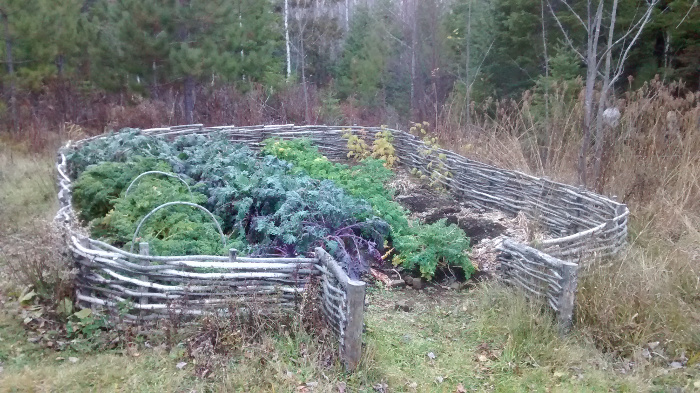 Next: On to Part 2
Previous: In The Beginning